VHE has carried out five phases of work on the former Neepsend Gasworks in Sheffield between 2006 and 2012 on behalf of National Grid Properties totalling in excess of £10 million.

The city centre site covers an area of approximately 5.3ha and was used for the manufacture of Town Gas from the 1880s until its decommissioning in 1967. Demolition of the remaining gas works structures was carried out in the early 1980’s whereupon the site was leased for the purposes of treatment and transfer of construction and demolition wastes. The site was finally abandoned around 1986 and returned to National Grid. 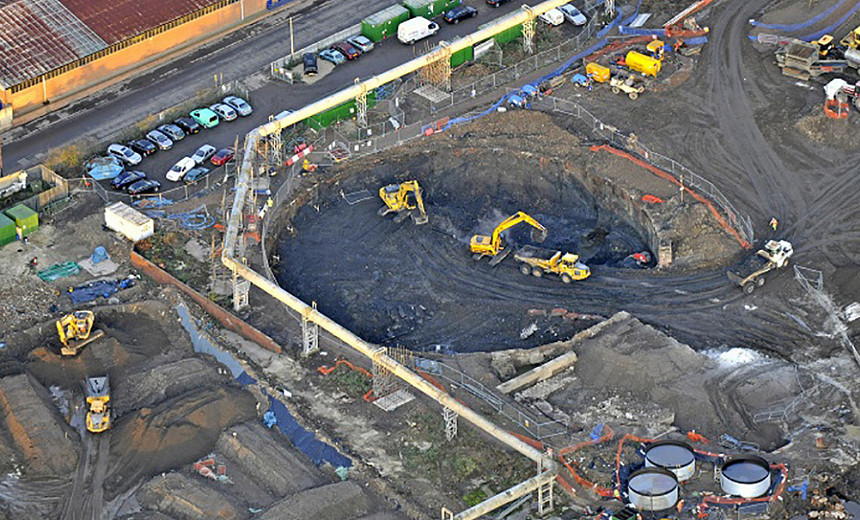 In common with many former gas works sites, live plant was still present within the site and had to be considered during the design of the works. The principal hazard to be considered during the works was the presence of a live overhead 36” medium pressure gas main, which crossed the site from east to west. This gas main lay approximately 2.5m from the edge of two of the four 15m deep gas holders to be excavated and required significant temporary works measures to be in place to provide additional stability during the works.

Other hazards included a 7m high retaining wall forming the eastern boundary, which retained a live railway line and the presence of a civil engineering contractor who was a tenant on the southern section of the site. The eastern retaining wall had been constructed in the 1890s and had been buried during the 1980s. The condition of the wall was unknown and during the works a structural surveyor was appointed to carry out periodic surveys as sections were uncovered.

A total of 17,000 tonnes of contaminated material was sentenced for treatment by bioremediation. Primarily, bioremediation was used to reduce the classification of soils from hazardous to non-hazardous in order to minimise the amount of waste consigned to hazardous waste facilities. In addition, around 4000 tonnes was successfully treated for re-use on site.

Hydrocarbon contaminated groundwater was extracted during remediation and pumped to a water treatment area comprising 6 holding tanks and a treatment system. Treatment comprised a 3 stage oleophilic, hydrophobic wired unit feeding a carbon filter pod. All treated waters were discharged under a formal consent agreed with the local water authority.