The site identified for the Village was a mixture of residential, industrial and open spaces with significant areas of vacant land. There were approximately 859 households with a population of 1,600 in the immediate area of the site which is immediately adjacent to the River Clyde.

The works involved site clearance, selective excavation of around 140,000m³ of contaminated soils and materials from around 100 various areas across 33 hectares of the proposed site, and reinstatement to allow the construction of the Athletes’ Village.

VHE hold SEPA Mobile Plant Licenses which were deployed to permit Soil Washing and Bio-Remediation as the primary treatment with 100,000m3 washed and 6,000m3 treated by bioremediation. 40,000 tonnes of asbestos contaminated materials were identified and transported off site to the Customer’s own landfill. 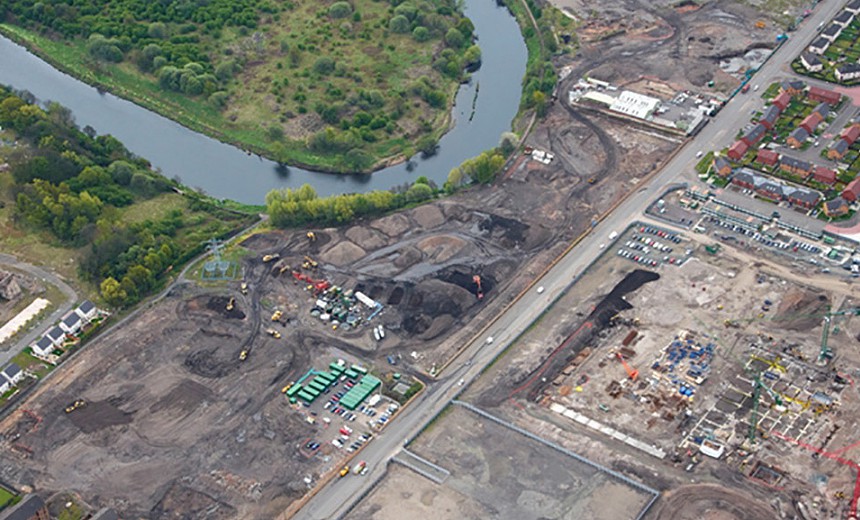 The wash plant was specifically designed and assembled by VHE for the site and utilized various pieces of equipment hired in and combined to form a bespoke plant.

Invasive species were present on the site in the form of Japanese Knotweed (JKW) and Giant Hogweed with 5,000m3 of JKW being mechanically treated on site. VHE employed an archaeology specialist both as a watching brief and to monitor, inspect, and log any historical structures uncovered during the works.

VHE also employed 4 new starters including one modern apprentice as part of a community benefit commitment.