Part 2A remediation of the gardens to 42 domestic properties in the Hartley Avenue and Claremont Crescent area of Meanwood in Leeds.

The contamination in the area was discovered by Leeds City Council Contaminated Land Team whilst carrying out the sampling of sites which had been identified as part of a series of infilled quarries through the council’s inspection strategy, conducted under Part 2A of the Environmental Protection Act 1990. Hand pits were dug and soil samples collected for analysis. This revealed the site wide presence of the contaminants benzo(a)pyrene, other non-threshold PAHs and arsenic and localised lead, nickel and zinc. A site-wide exceedance of the site-specific acceptance criteria (SSAC) for naphthalene was also identified. 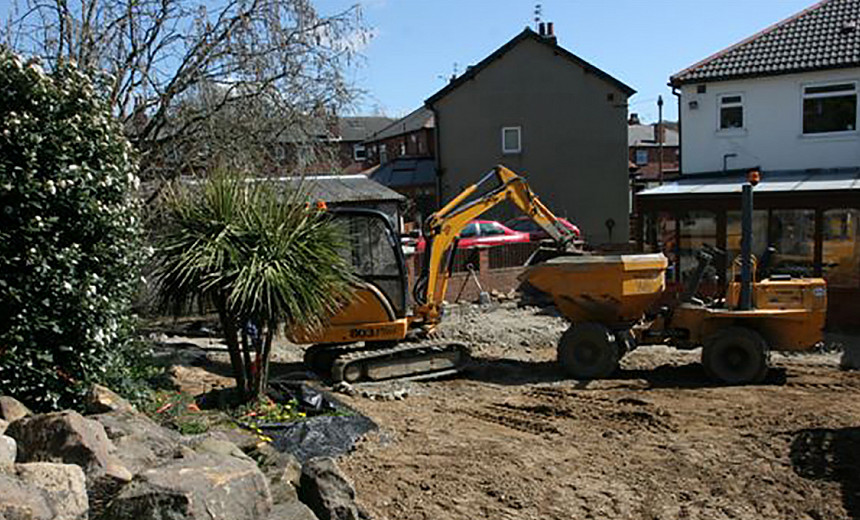 The remediation strategy comprised the excavation of affected soils down to 600mm in front and back gardens. Areas beneath concrete (pathways and driveways) were not remediated but patios lifted so underlying soils could be removed, suitable founding materials imported and the patios replaced. All excavated material was disposed to landfill either as hazardous or non-hazardous waste. Following excavation gardens were restored to existing levels with the importation of clean material to provide a 300mm layer of topsoil and underlying subsoil (total 600mm cover), underlain by a geotextile barrier and geogrid warning layer.

The proximity and age of the properties meant the areas to be excavated contained numerous underground services including gas, water, electric, surface and foul drainage, cable TV and other domestic supplies. Extensive investigation and hand excavation was required to locate and minimize disruption to the residents.

Health and safety of both operatives and residents was paramount on this project. Preparation, monitoring, coordination and resident liaison were major features of the work, particularly during the removal of the contaminated material whilst maintaining access to the properties at all times.

Each property was surveyed and photographed, and a restoration schedule agreed with the resident and the client prior to commencement.

Properties in Hartley Avenue were constructed on top of the former quarries and the sloping nature of the ground required careful consideration particularly when excavating adjacent to the properties and also substantial retaining walls on both sites. The tightness of the site at this location and the lack of space for a site compound resulted in the closure of the road and diversion of traffic to allow the compound to be located on the highway and for the works to be undertaken.

The works were undertaken in phases and were programmed to last 16 weeks. Regular liaison was maintained with residents of the affected properties and neighbouring premises throughout the duration of the works which remained occupied throughout the works.