Following on from our success in completing preparation works for the 2014 Commonwealth Games Athletes Village in Glasgow, VHE secured yet another major project in the city. The Shawfield based project involved the remediation of a key strategic site on behalf of Clyde Gateway in advance of future development and also to provide key pedestrian linkages required for the 2014 Commonwealth Games.

Working closely with URS and Clyde Gateway the project commenced in August 2013 and involved the re-engineering of nearly 80,000m3 of earthworks requiring carefully controlled materials management to create development platforms, accesses and sustainable urban drainage systems. VHE also undertook the demolition of several buildings and removed in excess of 25,000m3 of surface concrete and foundations which were processed, recycled and re-used on site. Recognising ecological issues such as badger relocation and treatment of invasive species a major re-profiling exercise was undertaken to the banks of the River Clyde to prepare areas for the Clyde Walkway, linking other sites along the river as part of the ongoing transformation of the area.

A critical element of the works was to deal with the ground contamination on the site, principally in the form of Chromite Ore Processing Residue (COPR) from a former chemical works, historically used to backfill disused clay pits.

The main environmental issue associated with COPR relates to the presence of hexavalent chromium (CrVI) and the overall aim of the operation, designed by consultant URS, was to treat the hexavalent chromium within the saturated zone of the site. Extensive site trials were undertaken to help establish the most effective treatment process which led to a new form of specifically manufactured chemical reductant solution, Calcium Polysulphide (CaSx), being selected due to its high reactivity properties. Manufactured in Japan and then transported by sea to Scotland in 6 separate containerised shipments, the chemical arrived on site and was stored in a heated storage facility inside a tented structure set up by VHE. This was where both the mixing and preparation of the final solution took place.

The solution was distributed to 8000 injection points, inserted on a grid pattern to help target specific affected areas of contamination. Carefully controlled doses of solution were injected under pressure via steel rods inserted into the ground to a prescribed depth, this process was carefully monitored and logged to determine the success of the injection process.
Injection took place at 200mm vertical intervals as the rods were withdrawn with the results recorded to ensure that all areas received the correct volume of solution. Where it was deemed necessary re-drills and the injection of further solution was undertaken. Ultimately, the success of the treatment will be determined by extensive monitoring of groundwater both within the site and the surrounding area, including the River Clyde which formed the boundary to part of the site.

Due to inconsistencies in the ground, such as clay spots, it was not always possible for the solution to be injected as anticipated. Accordingly various ‘what if?’ scenarios were developed in advance of the work and briefed to the site teams to accelerate the decision making process during almost 150,000 individual injections.

The injection works successfully treated around 70,000m3 of Chromium contaminated soils down to 6 metres below ground level within the saturated zone. All works from initial site preparation were undertaken with strict environmental controls in place, including monitoring of the River Clyde three times a day from eight separate locations and despite the prospect of unpleasant odours generated by the use of the Calcium Polysulphide no complaints were received throughout the process.

One key driver for the program was the preparation of an area for the construction of Public Realm works to construct a pedestrian linkage to the Smart Bridge being constructed over the River Clyde in time for the Commonwealth Games which started in July 2014. This area was successfully delivered on time while works continued on the rest of the site to prepare it for development.

Continuing commitment to sustainability, VHE and the sub-contractor Provectus were fully aligned with the community benefit initiatives in place to provide employment for 12 local people, notwithstanding the specialist nature of the works.

VHE worked closely with and would like to thank Clyde Gateway, Turner Townsend Project Management, URS, Provectus and many other stakeholders for helping to make this technically complicated project such a success. Improvement of this area in Glasgow adds to VHE’s comprehensive portfolio of treating a vast range of industrial legacy ground conditions and further enhances our reputation as one of the UK’s leading remediation contractors 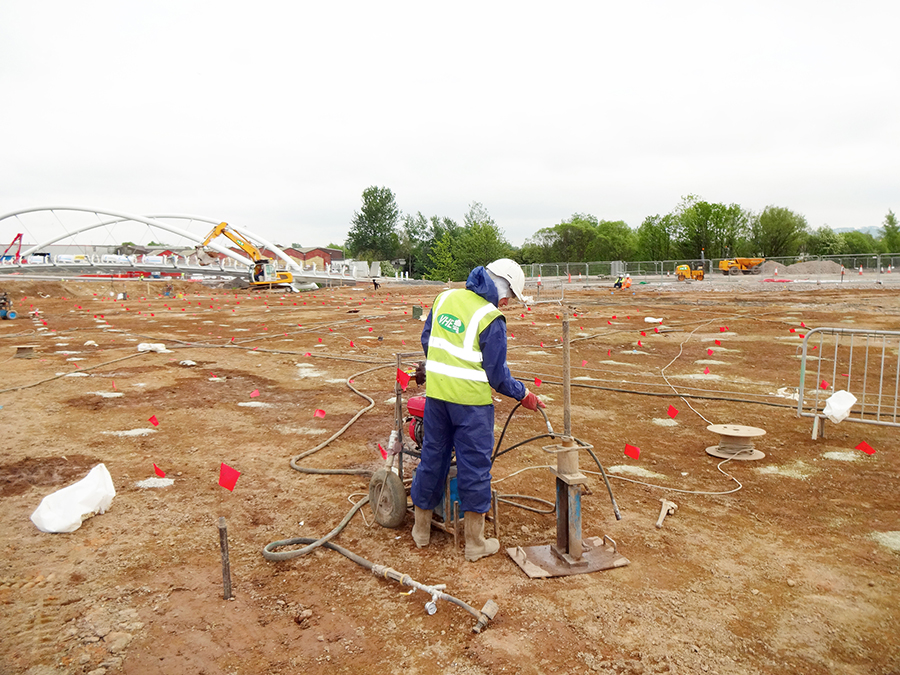